DnD Central / Re: Why is there such a routine big police (and coloured) problem in the US

Issue
Code: [Select]
In the output, the asterisked things are available for trial (and error). In my case, sudo gpm -m /dev/input/mice -t imps2 makes the laptop touchpad work.

Indeed, this is the default behaviour! I guess it depends on the Browser/OpenLinksInNewTab setting in about:config. When "yes", the home page button opens in new tab.

Also, it is possible to replace the new tab button with the home page button, and to rebind new tab keybind to go to home page.
5

I went along with a stupid memery to work up exactly this machine as my laptop mostly to boot into console. There are two possible paths. Either I put a boring LMDE on it and then start mostly uninstalling and deleting stuff or I put some BSD on it and learn to build and compile things on it until the console can display colours and Japanese and Ethiopic and switch between keyboard layouts (alphabets like Cyrillic and Greek) as a typing machine should. Maybe even mousing is possible in console?

By the way, what is happening to 32-bit Linuxes? Manjaro and Arch dropped official support for 32-bit some weeks ago.

2020-05-24, 13:36:36
@Frenzie What do you think, is it possible to have an equivalent for my "Edit link" menu item in Otter?
Code: [Select]
Look how wonderful Opera's configuration was. Everything in one line, and it makes perfect sense, because you really want your little edit to be one seamless thing, to speak as one sentence in one breath. JSON is hopeless with its unnecessary linebreaks, indentation, several types of brackets, and deadweight words like "action" and "parameters". It has no common-sense semantics.
7

2020-05-24, 09:58:43
Ah, so this is what Emdek meant when he spoke about implementing macros. So it is there, sort of. (Sorry, when I think of Opera, I can only think in terms of INI and how simple and instantly usable it used to be. Opera was insta-ready for it.)

Figure it out, Quetzal, and your new tabs will be able to load the home page.
8

2020-05-24, 08:35:30
If I remember right, old Opera did not have this kind of new-tab option either, at least I cannot find it in my Opera 11. However, what you could do was to reconfigure the new-tab action to include Go to page. As follows
Code: [Select]
How (and if) it works in Otter's JSON, I have unfortunately no idea. To me JSON is incomprehensible and unmanageable due to its multiline, indented and bracketed structure https://github.com/OtterBrowser/otter-browser/blob/master/resources/keyboard/default.json

And I do not see any example or evidence in JSON that one keybind can do multiple actions in sequence. Somebody please prove me wrong.
9

2020-05-23, 08:56:57
The usual way I try to install Linuxes these days is to dd them to a USB stick and then try to boot the stick on the computer or laptop. However, many distros or opsyses do not boot this way. For example Slackware and FreeBSD consistently fail. At the same time, I cannot find any information on what their way of getting to boot up or getting installed is. Why does the regular Debian not boot up while LMDE (Linux Mint Debian edition) has no problem? How do you install Haiku or Dos?

Otter Browser Forum / Re: and linux ??

2020-05-23, 08:14:34
Moreover, Otter browser is available in the official repos in Manjaro Linux. When you install the official package, you do not have to update it specifically, except when updating the distro. This is as simple as it can get.
11

Otter Browser Forum / Re: and linux ??

Years ago I moved to Manjaro and found Otter much easier to install from AUR (Arch User Repository).

It is also worth it to learn to git clone https://github.com/OtterBrowser/otter-browser.git and build locally.
13

DnD Central / Re: Tripe about Ukraine

A former colonel in Russia's FSB security service says he takes "moral responsibility" for the 2014 downing of Malaysia Airlines flight 17, but insists that his men did not down the passenger jet.

Igor Girkin was leading Russia-backed separatist forces in eastern Ukraine when the passenger plane was shot down and crashed in the region on July 17, 2014, killing all 298 people on board.

Girkin and three others have been charged in absentia by the International Court of Justice in The Hague.

In my opinion it is criminal that EU refrained from going in to investigate when the airplane was downed. It could have put an end to the whole separatist war thing for once.

And here is some musical variation on his theme.

I've noticed older versions. Can you name the original, please? I'd like to hear it. Might help with the earworm.

This is the original https://en.wikipedia.org/wiki/Running_Up_That_Hill

Youtube is full of Kate Bush's versions, studio, video, and live. Some time earlier this century the song was also repopularised by Placebo.

The last updates to musical styles and trends occurred in the early 90's. There has been no creativity after that, only recycling. And it is not helping that she looks like one of my evil aunts.
17

The RIVM says that counter-intuitively, the more people have received the flu vaccine the worse outbreaks get. Because then there's less herd resistance. As such the yearly flu vaccine should be given primarily or perhaps even exclusively to risk groups for best results.

Assuming that there is no herd immunity to this thing, this is not counter-intuitive at all. Vaccination is exposing people to the disease, and the more people you expose, the more get sick, straightforwardly. Herd immunity, if any, can be observed at later waves and I don't think we are seeing any with flu-like diseases. We have already been exposed to it for a bunch of generations. I'll stay at the country house another week.
18

The rate-of-contagion curves for countries like USA, UK, and Sweden - those who seem to have adopted the "flock immunity" policy whether consciously (Sweden) or by way of incompetence (USA) - have been grouped together with Belarus, Russia, and Brazil, where the contagion is simply skyrocketing.

I have my doubts about the flock immunity point of view. If it worked against something like flu, we would not have much flu these days after having had it regularly almost every winter for over a century. Yet we still have flu - less with those who observe the hygiene and wear clothing appropriate to the season.

So I tend to side with the distancing policy. And I am quite sure it is a disease of cities and crowded places. It would be interesting to see the countryside-vs-city statistics of course.

Youtube is getting very naggy about login. On smartphone the YT app boldly switched my status to logged-in at some point and there was no way to get out, so I uninstalled the bastard and I am now using an alternative on smartphone.

On TV, the YT app keeps nagging nastier and nastier as I refuse to update it and it does not have enough data to log me in. We'll see who wins in the end. Probably must figure out a way to install some ordinary opsys on the TV at some point.
20

The final objective is to perpetuate lousy working. clients will always keep on paying  (and testing)- so they think.

In their productivity apps they already have the ridiculous unsolicited popups asking feedback a la "Do you like our app?" and "Rate the call!" This is offputtingly unprofessional. It is not fitting to a desktop workstation.
21

There does not seem to be anything major in the video. The biggest is perhaps the change to Cortana (suspiciously similar to Corona), which gains its own window, as if it were an application. Hopefully it will become possible to uninstall it at some point

The general design philosophy seems to veer towards Gnome: Every app is its own thing with its own theming and decorations, own possibility to resize, minimise, and on-top (or not), instead of letting a window manager handle all that. I am completely opposed to this philosophy.

Come on, you are called Windows, so why don't you manage windows properly?! There should be a window manager with ability to theme all windows and apply window decorations uniformly. Each window should be resizable, minimisable, and on-toppable.

In my current workflow, the Windows calculator thingy is most offensive. I would like to have it small in a corner on top of all other windows, but in the MS world, the on-top version of calculator is given a limited design (missing the history part) compared to the normal calculator window. Unusable.

Looking forward to more mess-ups, headaches and frustration with the next update.

DnD Central / Re: What's Going on in Amerasia?

Video footage of North Korean leader Kim Jong Un attending a fertilizer plant opening has been released by state media outlet the Korean Central News Agency (KCNA). The footage follows KCNA reporting that Kim cut a ribbon at the event on Friday, ending three weeks of speculation about his wellbeing.

The video footage, which emerged on Saturday, shows the leader of the secretive East Asian nation in an all-black suit. He appears relaxed and healthy while he claps, talks and cuts a red ribbon in front of the factory. He is surrounded by functionaries -- most of who are wearing facemasks.

The video footage has not yet been independently verified, but it is thought to be from Friday.

Media interest is often stoked by the notable absence of the country's leading figures from key events. In 2014, Kim disappeared for nearly six weeks before reappearing with a cane. South Korea's spy agency later said he had a cyst removed from his ankle.

DnD Central / Re: What's Going on in Amerasia?

A special train possibly belonging to the North Korean ruler, Kim Jong-un, has been spotted at a resort town, according to satellite images reviewed by a Washington-based North Korea monitoring project, amid conflicting reports about Kim's health and whereabouts. 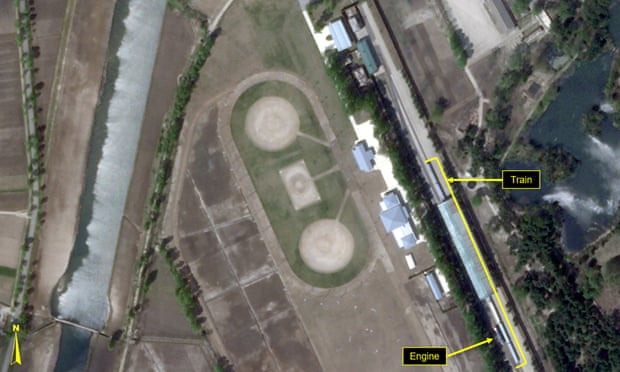 This is a train indeed.

On Thursday the US president, Donald Trump, played down reports that Kim was ill. "I think the report was incorrect," Trump told reporters, but he declined to say if he had been in touch with North Korean officials.

Trump has met Kim three times in an attempt to persuade him to give up a nuclear weapons programme that threatens the US as well as its Asian neighbours. While talks have stalled, Trump has continued to hail Kim as a friend.

No reporting is complete without Trump.

This one is ridiculously expensive. In addition to other features, it is missing legs, Win and Menu keys. It apparently is some historical celebrity or curiosity and I had to pay attention to get the USB version instead of PS/2.

Its positives are trackball, low profile, and near-portability. Also colour, as it has slowly dawned on me that I like light keyboards better than dark ones. This keyboard has almost enough to make me keep it.