But how about when your king is a total moron [...]

Enlightened monarchies do have the internal mechanisms to solve those issues.

As a monarchist and a proponent of democracy, you would rather elect kings, right?

Glad you ask that because many people don't understand the reason why to defend a non elected state role in a Democracy.

One of the many functions a king goes beyond any president is because people aren't artificial political constructs, people are real and people organise themselves, at most human societies, in families.
To have a human being organisation at the the top of the state is the right way to prevent the arrival of Brave New Worlds or autocratic regimens that try to dehumanise human beings and turn them into obeying-non thinking robots.
Et voilá.
3

Course I will not vote. I never vote. For a simple reason, I will vote when voting bulletins have an option at the last row for a "None of the above" option.That option must be counted as any other option and if it wins, elections must be repeated but with a major difference, the candidates can't run again, it has to be new ones.

Why such option never exists? because it's the only way that would change the actual system and that's not admissible.
People are forced to chose amongst what is given to them to chose, not what they want.
This is not democracy.

What is that? the Bible of the State?

Not in the EU though

Yes, they would be like the Swiss... or the Norwegians. Very much political correct this Cimmerian.

2020-12-30, 12:11:06
For the detractors of the EU, the centralised vaccine acquisition process by Brussels for 27 countries was a fantastic thing allowing smaller countries to have the same negotiating power as the bigger ones.
Was not for that and people from Malta or Portugal or Estonia or many other nations would be vaccinated maybe by 2025.

A rare (very rare) example of the benefits of a centralised model of government, the same way the international co-operation between scientists was also a rare example of globalisation benefits. 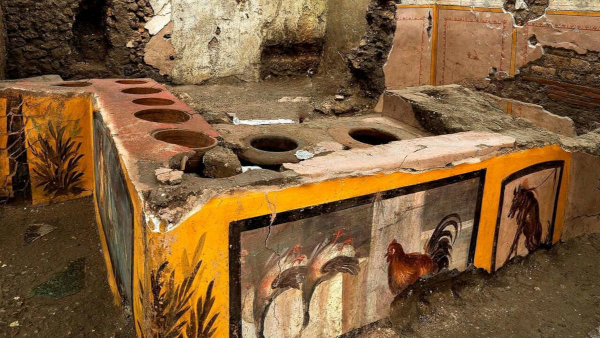 Archaeologists uncover ancient street food shop in Pompeii
You can know what people were eating at the disaster day... (a bit of a morbid thing to know)
11

This deal is nothing, mainly about some minor fishing, nothing about finance or economics. A way to the UK government to make the British population believe they still have any negotiating power. They don't.

I have to salute the Scottish prime minister's words that they didn't vote nothing of this and this is the moment for Scotland to become an Independent European nation. Be welcome.

Do we invest too little in public infrastructure, or too much?

Here you have a simple answer: Manmade mass outweighs life on Earth
15

2020-12-21, 10:31:40
When spying was a thing proper of human beings, not electronic machines, the Soviets stolen the plans of the British-French marvellous airplane - le Concorde and made their own supersonic, the Tupolev TU-144.

The Tupolev crashed at it's world presentation at the world famous Paris - Le Bourget air show.

Beware of the Chinese, those makes the stolen things to work effectively.

They do not acknowledge that society exists in the first place.

I believe that in the first place exists the moral rules that should govern civilised societies.
Isn't The Lord of the Flies a classic chez vous?

Bus yes, I agree that is no one job to convince others. For that we have missionaries, teachers and politicians.That's enough boring people.
17

2020-12-13, 08:49:55
I think the real point is that if I earn more than I need is it  a moral obligation to distribute a part I don't need with those who are suffering or not?
That's the foundation of social justice.

I haven't tested it yet. Does it import Opera's mail? If not, it is a big missing feature...

It seems so, but I never did it. Have a look here.

The best way to move all of your emails from your current mailbox to Vivaldi is to set up both Vivaldi account and your current email provider's account using IMAP in an email client of your choice (e.g. Opera M2, Thunderbird, etc.).

Vivaldi browser, mail and calendar are my trilogy of preference these days. Together with Qwant for search engine.

2020-11-29, 09:13:16
American friends should understand that 99% of Europeans absolutely don't care about American domestic things. What interests us it's the international American positions. Therefore Biden has already made, just with his announcements, much better than anything Trump ever did.

Not so speak about the lack of class, you just can't present into the world aeropagus with a moron like Trump representing you. Glad that finished.
21

I doubt it'll hold up in court, but for now we're stuck with it. I

Here, it was necessary that the President declared in the first place the Emergence State (which suspends certain constitutional rights and freedoms) and only after that it was possible to impose a curfew.

Specially if we consider that besides having two decide between two intellectual nullities to command their national destiny they are also asked to have an huge responsibility in world policy without any candidate able to perform at such level.
24

Plot summary
In a Tibetan lamasery, the monks seek to list all of the names of God. They believe the Universe was created for this purpose, and that once this naming is completed, God will bring the Universe to an end. Three centuries ago, the monks created an alphabet in which they calculated they could encode all the possible names of God, numbering about 9,000,000,000 ("nine billion") and each having no more than nine characters. Writing the names out by hand, as they had been doing, even after eliminating various nonsense combinations, would take another 15,000 years; the monks wish to use modern technology to finish this task more quickly.

They rent a computer capable of printing all the possible permutations, and they hire two Westerners to install and program the machine. The computer operators are skeptical but play along. After three months, as the job nears completion, they fear that the monks will blame the computer, and by extension its operators, when nothing happens. The Westerners delay the operation of the computer so that it will complete its final print run just after their scheduled departure. After their successful departure on ponies, they pause on the mountain path on their way back to the airfield, where a plane is waiting to take them back to civilization. Under a clear night sky they estimate that it must be just about the time that the monks are pasting the final printed names into their holy books. Then they notice that "overhead, without any fuss, the stars were going out."

t seems that Mexico got a president who is clearly a historical ignorant and an idiot. It happens frequently with Republics.