Used to enjoy it and spent many a happy hour constructing them, then painting them to try and make them look realistic. Mostly plastic model kits, but I did build one balsa wood model aircraft and that took me a long time, lot's of cutting parts for the frame. Doubt I could do it nowadays, you need good eyesight and a steady hand.

Only piece of advice I would give is take your time and don't rush it. Enjoy your new hobby.
2

Who could've guessed that would happen?

2021-07-17, 11:58:15
That's quite young for a cat, being so sudden even harder to bear. At least with our last cat we knew six months before he went that his time was up and he'd reached the grand age of 18 years old. Still hurt like hell when the day came though.

Extra snuggles needed for Lexi as I'm sure she'll be missing Nushi  too.
5

2021-07-16, 14:15:36
So sorry to read that Frenzie. The hardest part of having a pet is having to let them go even though you know it's the right thing to do. I'm sure you gave her the best chance of staying with you, but sometimes it's not to be. Poor Nushi, she is bound to be missed. I know for sure she would have been comforted  by you being there at the end. Over the rainbow bridge she goes with all our other loved but departed pets.

DnD Central / Re: what's going on in france

Hey, Tour de France is on. Why didn't anybody tell me?

I'll try and remember next year.

Do you think England, Scotland and Wales should compete separately on Eurovision like they do in football?

I don't think there's enough interest for it outside of England if truth be told, for us to even bother trying to compete. I have no doubt that if we did, we could pick better acts and better songs though.
11

The Lounge / Re: Guess Who

Seriously difficult to find images for this thread avoiding urls that identify.

You've spotted the one major flaw with this thread, probably why it didn't really take off. Google images makes it far too easy anyway.
Nice picture of the future Queen of little England though,

Or Prodigy was good until it wasn't too ravey.

First three albums were OK, but yeah after that not so much.

By the way, did you notice that Daft Punk broke apart?

One of those bands or should I say "duos" that passed me by I must admit. I know their big hit Get Lucky with Pharrell Williams, but other than that I can't say I would know who it was if they came on the radio.

Listening to some Rammstein.

One of my close friends favourites. I just can't get into them myself.

Scotland not in Gt Britain

What have you been told about that?
16

DnD Central / Re: A new questionable separation political party in Scotland (a farce!)

2021-04-15, 12:44:27
There's more than three. SNP. Scottish Greens, Alba, ISP (Independence for Scotland Party), AFI (Action for Independence). The AFI have stepped aside for this election and are backing Alba. I think ISP have as well, but don't quote me on that as I may be wrong.
17

I have an excellent cd of Billy J Kramer.

Jolly good Rj. I myself have hundreds of CD's but that's not the topic of this thread. It's, What music are you listening to right now? The clue is kind of in the title.

But as you've mentioned Billy J Kramer, here he is with the Dakotas with one of my favourites from when I was a wee nipper.

Ah, the dreaded after effects. :/

Seizures, Kidney failure, Immune system non-existent, to name a few, Think it's fortunate that he was in an induced coma for most of it.
19

DnD Central / Re: A new questionable separation political party in Scotland (a farce!)

2021-03-27, 14:14:04
He's aiming for the list vote and I get his reasoning for that as it will hit the unionists as most of their seats are on the list. I'm not convinced myself that trying to game the system will work, it's been tried before and ended in failure. He will have his diehard followers of course and they will follow him regardless. The rest of us will vote on our principles and policies, rather than vote on personality.

If his Alba party gain a single seat, well let's just say I will be mightily surprised.
21

2021-03-07, 21:18:51
Here it's done by market research for BARB (Broadcasters' Audience Research Board) by a selected number of people. I've no idea how many people but I guess it's got to be a good few thousand to be of any use. So the figures are very much an estimate based on the average feedback they receive.

I was selected to do it many years ago and I did it for 2 years, then it's time up and someone else gets selected. I have never known anyone else that has ever been selected, so why the hell I was I have no idea.

When you are selected and approved, you receive a weekly booklet full of all channels and programs. You tick a box and note the time the length of time you watched any given program. Anyone in your house at the time of watching counts as an extra viewer and go into the figures. End of the week you stick it in the post and send it to them.

It's not the most exciting thing I have ever done.
22

I forgot to renew the domain name.

Aha! That would cause the problem right enough.
I thought automatic renewal was standard unless you took steps to cancel it, That was the case with mine anyway.
.
23

Even with that money given to Scotland

Are you really going to start with this repetitive nonsense again?

We are given nothing, it's already our money, If anything it's the other way around. Why the hell do you think the rest of the UK want's to hold on to us? It's certainly not for our bloody charm. If we were subsidised by the rest of the UK we would have been jettisoned long before now. It would be a blessed relief for them to get rid of us moaning Scots and save some revenue for themselves. 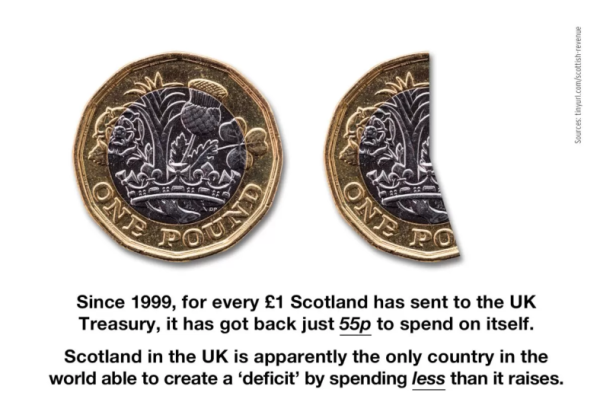 The Barnett Formula Myth Destroyed - It does not subsidise Scotland

Arguably the most misunderstood part of the UK public sector budgeting mechanism is the Barnett Formula. The vast majority of people, politicians and the media seem to think that Barnett represents a subsidy to Scotland. Many Westminster MPs (mainly Conservatives) have described it as English taxpayers subsidising Scottish public spending, and the mainstream media have run headlines along those lines. There is just one little problem with that idea - it's complete and utter nonsense.